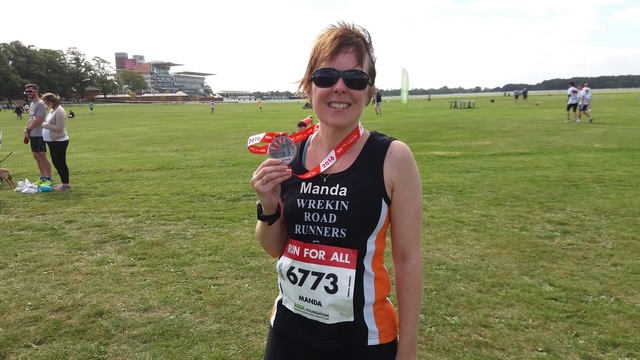 ​Amanda Lysons
The race morning greeted us with heat, sunshine and gusting winds – but atleast they would keep us all cooler for the run and surely it couldn’t be head winds the whole way round!?

The run started and finished on York Racecourse, and with the odd sneaky little hill it wound through the city centre (perfect for a spot of window shopping as you went by), past the Minster Cathedral, with its bells ringing in support of the runners and also taking in the riverside – it was a fab route.

The event was exceptionally well organised and support along the way was fantastic – a race I would definitely do again.

And in case you are all still wondering, there was the odd street that was a wind tunnel, but not enough to dampen everyone’s spirits.

Report by Dawn Humphries
​My first trail run, I had been told it would be a challenging course, which mixed with hot weather made it especially so for the "ancient and arthritic" as my girls call me.

Unfortunately, it was not very well sign posted from the main road, so we didn't get there until 10.00. Lots of free parking, and well signed once in the main entrance, but, nothing from the road, hence us being tight on time for a 10.30 start. Consequently was then faced with the ubiquitous queue from hell for the portal loo, so stood for nearly 30 mins and literally only made it to the start within seconds... A lot opted for the privacy of a fern covered stop en route but my modesty prevailed.

Fortunately, it was a phased start, so fine for me as I was at the back and not looking for a PB. Once underway there was a lot of congestion, even with the phased start. There was single track for a while, as I was only planning to "pootle " around this was not an issue, but would have been a bit frustrating for the speed fiends.

Finally it settled down, I can say the scene was absolutely stunning. Beautiful woodlands, and lakes, very picturesque, so I did try to enjoy that and ignore the killing hills that seemed to make up most of the course, especially the minxy once just about half way round, which put the park run hill into context. I think I could accurately describe it as a challenging course, the first half was predominately up hill, second half was only marginally easier, not exactly down hill, and still tricky due to the stones, sand, and odd cyclist.

There was just one water station, but again well organised by the time I got there, and as only a 10k that was fine, but glad I had water with me due to the heat. Not much crowd support around the course for obvious reasons but I didn't mind that, but a good finish support. Oh and a big thank you to team Wrekin for cheering me on, on the last straight in my hour of need, very much appreciated.😀

Very sandy and pebbly all round, with marked good trails, one stream crossing, there were stepping stones for those who wanted to queue and not get wet... declined that option and splashed through, as I am now a real trail runner!

Overall very friendly and well marshalled, unfortunately there was no-one at the sharp turning at 9K so disappointedly, I missed the turn and ended up back the visitors car park before I realised my error, had no idea where to go, so had to go back, and found about another 10 runners who had made the same mistake, so was a bit gutted and it was grim having to run back and recover the distance...overall did 7.2 miles! Hence my utter appreciation of the friendly Wrekin faces on the last leg. As my husband said... "Value for money," can't repeat what the girls said!

So, despite the heat and the hills (am still waiting for the latent Wrekin hill lover to emerge) and getting lost. It was a friendly and well organised race, nice blingy medal, the goody bag was a little light, but included some healthy treats, some Harribo's and a chewy drumstick thing...the children liked it though, bananas and water available too.

I would do it again next year, beautiful course...just need to embrace those hills, and not get lost.

Report by Kathy Ling
Last night just popped up to Moulton to run the Pie and Peas 5 miler with a lot of undulating and rough patches. I had to keep my eye on where I was going. The Vale Royal A C organizes the event and this is my 3rd year. 307 runners took part and it was a very warm evening. When I got as far as 2 miles the leader was on his way home. It was a great atmosphere in the village but on the way home all I could think of was the Pie and Peas waiting for me...would there be any thing left?? But there was and very nice too. I love this race and would love to do it again.