Wrekin invade Brum!
Heading towards Birmingham on the fun bus in the driving rain I will admit my enthusiasm was lingering somewhere between taking the car for an mot and visiting the dentist. Taking refuge in a coffee shop it wasn't until I looked round I realised I was the only one running who hadn't set off for the start line but with over an hour till my race start the lure of coffee and croissants was too strong to resist. In the end the race god's were merciful and it dried up by the time I shuffled off into my starting pen. As usual it took a while to move forward to the start and the first couple of miles were crowded but most seemed to be in the right wave as I didn't get stuck behind anyone ( or hold anyone up I hope!) My only gripe was the amount of runners with head phones in, very hard to navigate round someone who can't hear anything that's happening around you!
I love this run, it's got a great atmosphere, music and bands on the sidelines, random families coming out of their homes offering refreshment, use of their facilities (!) playing the eye of the tiger on their steroes and the hill just adds to the challenge. Inspite of their being nearly 40 runners from the club I only saw a couple, Donna who grimly informed me she'd gone off too quick, a wave from Darren on the loop back and Chrissy who breezed past me fresh as a daisy at 10 miles. I did apologize for telling her the hill wasn't that bad when I saw her at the end ....it'd been a year I forgot!
It was getting warmer as we went on and I was struggling as we hit the 10 mile marker. A huge rowdy cheer from our amazing support group on the flyover halfway up the long drag gave me a huge boost which lasted until I turned the corner to another hill, shorter but steeper. But the end was nearing, I could hear the announcer and smell the chocolate waiting for me in my goodie bag. A few runners were sitting or lying on the pavements, that last hill and the heat had taken its toll on some. Another mile and there's the 400m sign, then the 200m....longest 200m ever!
Absolutely wiped by the finish and then off to get changed and meet up with the others for a well earned pint.
This was my fourth year, it's the first race I ever did so will always have special meaning for me. I will be back again in 2017 though the course change will no longer include the hill which is a shame ( though I didn't think that on Sunday!)
Massive well done to everyone some really great times. Special mention to those half marathon first timers and a really big thank you to everyone who gave up their time on a Sunday to stand in the cold for hours and cheer us all on. Fantastic support. Fantastic club! 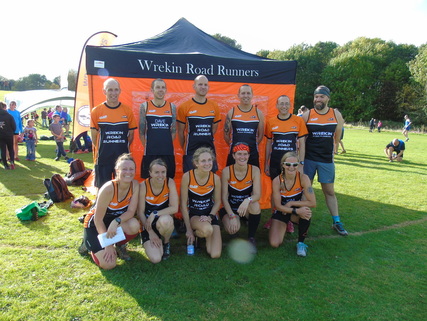 By Stephen Gill
As I am always nagging people for race reports so here’s mine.

For those that are new to club a bit of history.

I had been injured since 25th January 2015 and all last year had to support many a race but also my beloved Cross Country. Don’t ask why but I just love it. Mud, sweat, rain, cold afternoons, more mud, hills and more sweat – what more is there to like.
As race day come’s around I am an excited puppy.

We head out to Mold and the journey only takes 1.15hrs so reasonably short. We see Sally (who doesn’t need a sat nav) who happens to be going the opposite way but mine says straight on. We arrive and find the toilets for a relief break as you do. Sally turns up and we ask her how did the journey go? Very good we came straight here! Oh that’s strange as we saw you driving in the opposite direction to which she then knew she was rumbled. Sorry couldn’t resist putting it in Sally J.

It was brilliant sunshine as the 5 ladies took to the start. They had 2 large laps after a short first lap. Each large lap was around a school field and then around a farmers field, up one side and then back down the other side. The total length was 3.2 miles. The course was quite firm and only the occasional muddy bit. Quite tame in Cross Country terms as last year they were ankle deep in mud on the same course. All the ladies had fantastic runs and they were even smiling at the end.

The sun was still shining as the men’s race started 45 mins after the ladies. The 6 men had 4 full laps of the course which came out at just over 5 miles.

Starting at the back as that’s my preferred strategy I watched the speedy ones sprint off into the distance. I wanted to try to keep a steady pace and pass people along the way if I could. The first lap was ok, the 2nd was ok, the 3rd started to get harder and the 4th was hard.

I was running along with Mark Goodridge and as we were on our 2nd lap I noticed that the leaders were motoring and said "s**t it won’t be long before we get lapped." It was actually quite a while but never the less it happened, I didn’t get around 3 laps before the gazelles came leaping past. Why did they make it look easy as we pounded along.

The support from the ladies and our traveling supporters was fantastic and even if we didn’t acknowledge them every time we really did appreciate all their cheers.

So for me it was a fantastic achievement just to be there and where I finished or what time i did didn’t really matter. Running means so much to me that I just want to do it.

Please come along and try the cross country as team events its up there with the best. Comrades together battling the elements thrown at us.
​
P.S
Did I every tell you I love Cross Country?