Report by Steve Gill
​Another journey into Wales for the third leg of the series. A beautifully sunny, if not slightly chilly day awaited. As we headed down the A55 towards Bangor you had the lovely flat sea to your right and the snow covered hills to your left.
The location for the races were the playing fields alongside a local Athletics track, all within sight of the old bridge linking Wales to Anglesea over the menai strait.
The ladies race (3 miles) consisted of one small lap and two large laps. Starting in the bottom field (which somewhat resembled a bog) you headed around and up a slope into the large field. Around the field and past the club house. Then it was down through the woods on a single track and out back into the bottom field.
In numerous areas the going would be best described as heavy. This was a true XC course J.
The five ladies all did fantastic in the conditions. Special well done to Samantha Hall – Davies on completing her first XC race.
Next up were the five men.
The men’s race (5.4 miles) consisted of two small laps and three large laps. The conditions underfoot were obviously better now the ladies had ploughed up the course (not). I used my usual strategy of starting near the back and slowly picked people off as we went by to finish behind the same guy as the last race ( note to myself next time to try and beat him).
As usual great support from the ladies as we tackled the hill 4 times. As I approached the hill for the third time I was lapped by the winner (Rob Samuels who won the Snowdonia Marathon in the year I did it) as he floated over the mud as though it wasn’t there. Amazing in the conditions.
I loved this cross country even though it was the toughest one yet.
Next up in series is Baschurch in Shropshire on January 14th 2017. So with not so far to travel I hope to see more men and ladies taking part.

Report by "Awesome" Jo Smith
​I've never been one for bucket lists,that's just me, I guess I would then be disappointed if I didn't achieve them. That said I've always wanted to go to Las Vegas the bright light city, too many Elvis films I think. Then when I spotted that they do a half marathon and actually shut the strip a plan was formed.
The strip is only shut twice a year: New Year's Eve and for the Rock and Roll Vegas events. I didn't appreciate the complexity and impact of this till I arrived. This is 12 lanes of traffic which are constant.
Having had a few days to acclimatise and develop a rotten stinking cold, sympathy vote, race day arrived. It was the hottest and most humid day I'd known since we were there but the deed had to be done. I hadn't come all this way for a DNS.
The event started with a concert by Snoop Dog. Although I'd heard of him I'd not heard his lyrics and I'm glad to say there were only adults at the event. Google his lyrics but not for the faint hearted.
I said goodbye to my best mate and joined my green pen I knew it was going to be "awesome" when I found myself next to not one but 3 Elvis look a likes. Feeling " all shook up" there was a massive count down next to the Sphinx and we were off.
The first mile is running out towards the airport and then you turn and after about another 500 yards you see the famous welcome to Vegas since. A huge grin appeared on my already dehydrated face this was reality.
I ran past the Excalibur as with everything else brightly lit up then past the Empire State Building and New York New York on my left with MGM studios, Planet Hollywood home to Brittany Spears, on my right and the M&M store, how many varieties !!!! With over 22,000 runners in the half it was tight to start with but I have to admit when people stopped and started walking just after a mile I was a little shocked. 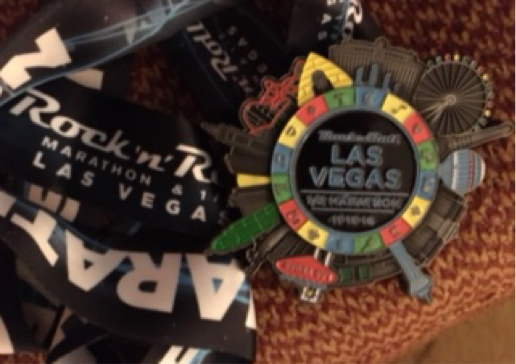 The crowds were great on the Strip all screaming that I was "just amazing" or " simply awesome " 😊
At mile 3 I had to take a little detour and I'm glad to say I went right to the facilities as left would have taken me through the run through marriage ceremony 😳
Continuing down the strip was simply amazing and incredible to think a few hours earlier it was heaving with traffic, the event is slick and well managed.
Just as I approached the Cosmopolitan and then the Bellagio all was going very well I was buzzing on the atmosphere. On my right was the Flamingo home for the 9th year to Donny and Marie Osmond then Harrahs where I was to spend many a few hours with Big Elvis and the odd Jack Daniels.
I heard my name and turned to see my best friend who had been able to track me due to a kind American the app didn't work on English handsets which was disappointing. According to this chap I was totally rocking it, and I was at this point. Niggles, sinuses pain and a tight chest were all in my imagination. Running past the Eiffel Tower then the Venetian they really are beautiful buildings and not the tacky imitations I some how had imagined. On my left Ceasars palace where Celine Dion has been performing for 13 years.
At mile 6 I had a little sing along with Elvis at the Little White Chapel and indulged in a bit of audience encouragement well we did come to party 👯 the race then continued past endless places where you could tie the knot and if you were feeling lazy there was even a drive through venue. 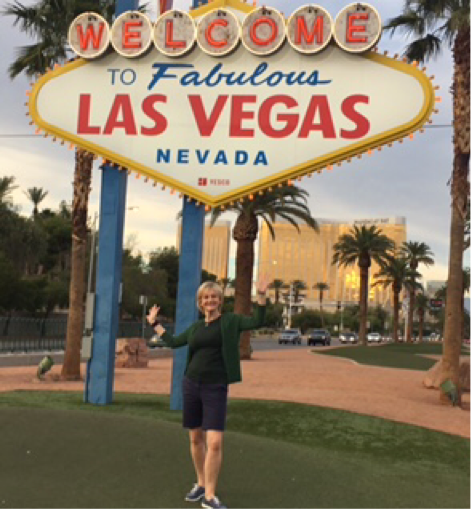 I picked up a nice chap from Surrey at this point and we ran together for the next few miles. He never trains he told me but has done 137 park runs and volunteered 78 times. He'd also done the 5k the night before to triple his bling. He was dressed head to foot in Union Jacks and knew from my vest I was from Telford!! He'd run Vegas before and commented that it was very hot dry and humid this year.
We parted at mile 8 as I headed into downtown Vegas as he said his pb wasn't going to happen and he'd catch me up. Alas I never saw him again and didn't join him to use our voucher for a discounted tattoo as he suggested the next day.
As we headed into downtown I started to feel tiredness hitting me. I'd forgotten to pack my usual gels but had some gel shots from the expo. Downtown Vegas takes you past the famous Pawn Shop, I've never heard of it but I'm told there is a tv show about it. You go past the stratosphere and storage yards and into the old town. This is where the sign is of the smoking cowboy I'd seen in loads of old films.
I'd already realised I was going to have to stop at every water station I tried to run and drink from the paper cup but without success apart from a nasal wash. The cleaners are straight there tidying up but paper cups are slippy.
A quick glance at my garmin showed my pace had really slowed down I tried to pick it back up as I got to 9.5 miles but as it ticked over to 10 it wasn't happening and my chest was suddenly being compressed by a boa constrictor, OK slight exaggeration but blimey I thought I've come all this way and I'm buggered if I'm not having that medal even if I can't breathe, strange what us runners think. Had I been home I wouldn't have even attempted the run.
At mile 10 those doing the marathon split off and run out down a long dark strip into the dessert, phew so glad that wasn't me. But again the number of people walking with only a 5hr window I seriously had my doubts they would make it.
The next 2 miles takes you behind the casinos and wasn't inspiring so I just had to keep telling myself I could get through it. I have never been so glad to see a mile 12 sign and try as I might to up the pace there was nothing left in the tank. The Mirage sign shined bright guiding me home, I don't recall seeing the volcano I just saw the finish sign ahead and pushed on. I had plans for a thumbs up arms in the air finish photo it was more of a stumble.
The finish line blurred and I found myself having convulsions but like a cat with a fur ball stuck. Next minute there was a paramedic with a wheel chair offering me assistance. That wasn't going to happen so I just slowly walked the half mile finish , jeez hadn't I done enough !! Collected my water, banana, fruit ,chocolate milk and pint of beer 🍺
I have to say at this point I was more than glad the finish line was right next to the Bellagio where I was lucky enough to be staying, with it's amazing musical fountains, and my wonderful friend then looked after me as I recovered and rehydrated before heading back out wearing my fabulous bling and ate the most ginormous turkey burger, fries and pickles 🐽
Verdict - Vegas has been an amazing experience and if you want to do a flat crazy race then put it on your list. The bling is fantastic. The event is well run and the strip is back up and humming within a few hours. There is live music most of the way round but the downtown bit for a few miles is quiet. I finished 4588th out of 22,052 runners and 1836th out of 13,758 women putting me in the top 25% which I was blooming chuffed with all things considering.
As the the rest of my holiday What happens in Vegas stays in Vegas 😉

The mens race started 45 mins after the ladies race. We had one small lap and two big laps to do. The usual frantic start by the speedy ones and before you knew it they were half way around the small lap, well almost. Apparently unbeknown to me the marshals didn’t send them the right way so we missed out the first small field.
After starting at the back I gradually moved through the pack doing really well on the upwards bits passing quite a few people. I never did see Lee through the race but as usual he made it look easy and had a fantastic run.
Special mention to Darren Owen – jones who doesn’t really like xc but played his part for the team.
Thanks also to Paul Spriggs for his support alongside, Susan Gill, Mark Dean and James Withington.
Funny moment of the day was after completing the small lap and just completing the first big lap a runner in front of suddenly burst into life and started to sprint. I couldn’t help but chuckle as he then realised he had to complete another lap –doh. Made funnier by his club mates p******g themselves with laughter at his mistake.
Afterwards Sally, Johnathon and myself all headed to the sea front for the consumption of fish n chips by the seaside. The fish and chips was gorgeous.
Upon trying to have our picture taken Sally went to show off our food only for a cheeky b*****d of a seagull to swoop down and nick her chips. At that point its mates joined in and it became a scene from Alfred Hitchcocks the Birds film.