3/4 of my crazy charity marathon series, which happened to clash with fathers day (Whoops!)

In brief its 8 laps around a 2 lakes within a housing estate! Sounds boring???

It was far from it as the light changes with every lap, also its ran in kind of a figure of 8 so you are never running in the same direction for long made it interesting indeed!

The course surface is very much like West Park at Wolverhampton and only has 27ft of elevation per lap!

Pb course I feel with the right training, the Ultra was only 2 more laps and had 8 competitors. If id done the Ultra I could of come third considering my pace, but oh well I wasn't entered into that so tough!

I managed to come 38th from 97 in the marathon so a very happy man!

**Mental note - Do not drive down on your motorbike, do Marathon, get very little sleep at hotel & drive back** 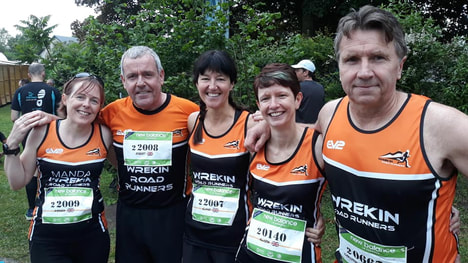 ​The next challenge was to find the race HQ so we could pick up our race bibs before it closed at 8pm.   After a brief game of motorway tag, our car took the lead and made it there first.  Considering Rob and Chris had both done the race several times before, neither were any help whatsoever!  Pauline must have spoilt them in previous years as every time we asked a question such as “where is the start?” and “where do the buses leave from?”, the standard response was “Pauline sorted that for us…!”  Thankfully the girls took charge and after sending Chris and Rob back to their car to get their race number details, we were all able to collect our bibs (which had a cute little UK flag on them next to our names!) and then make our way to the hotel.

What a nightmare this turned out to be!  After a hassle free 12hr journey to get there, the 2 mile car journey from the race base to the hotel took forever….  The 5k race was also due to start around the time we were there, in addition to all the road closures due to all the events taking place.  Over an hour after leaving, we finally got to the hotel (which weirdly turned out to be the same one that Pauline had booked for the group several years earlier).  Chris had asked earlier where we would be eating that evening – the response from Lysons Travel was, “our motto is ‘we’ll get you there’ – after that you’re on your own!”  With insider knowledge from Chris and Rob (not!) we randomly located an Italian restaurant and although we had to sit as two separate tables of four, it fitted the bill perfectly.  Our table were very virtuous and stuck to soft drinks (apart from spectator David who hit the cocktails) but we did notice the odd bottle of wine or two being delivered to the other table at the other side of the restaurant…..

Race day arrived and we set off early having decided to walk to the race HQ to get the buses after the previous evening’s car journey!  In a repeat of Birmingham Half 2015 (anyone remember where we left the coach?!), David skilfully navigated the group safely to the meeting point for the buses to take us to the start.  Sadly, this is where we parted company with Mel as she was doing the 10k race due to injury.

On the bus we sat next to one of the few other Brits doing the race (don’t get us started on the medical certificate palaver!) and set off towards Pegasus Bridge.  The bus journey seemed to take a lot longer than I was expecting for a 13 mile journey and I was keeping my fingers crossed we hadn’t got on one of the marathon buses by mistake!  Thankfully not, and we arrived in plenty of time to warm up and have a loo stop before the start of the race.

Which brings me to the loos…..!  On arrival I spotted around 8 wooden cubicles.  In a race with nearly 4,000 runners I assumed these were the first set and there would be others located around the area.  How wrong could I be?!  Not only that, they weren’t the usual chemical portaloos – oh no!  On entering the cubicle there was a bucket of sawdust and a small trowel – I’m sure I don’t need to go into further detail but we were really pleased we were there so early as I couldn’t shake the image of a sawdust mountain with the tip of it poking up through the seat…. Anyway, back to the race.
​We started by crossing the legendary Pegasus Bridge which in itself was a humbling experience.  After hanging around in the drizzle, the sun decided to make an appearance just as we were lining up for the start (have I mentioned how much I hate running in the heat?).  Most of us being a little under-prepared and Chris nursing a dodgy knee, we all started fairly near the back.  The route was beautiful as it went through little French villages and passed fields full of flowers.  It was mostly road with a few sections of rough track and narrow grass sections which kept the pace varied.  It was a bit of a struggle at times due to the increasing temperature and the sight of local children brandishing cold water sponges was just the best!  Due to the D-Day celebrations, there were Union Flags on display everywhere and banners on lampposts showing photos of the everyday people involved.  It felt a very special time to be there.

The final section approaching the town was tough – after passing the cathedral you could see an inflatable arch (yay!) but it wasn’t the finish line (boo!) and the route continued into the park.  The crowds were gathered in this area but there was still no sign of the finish.  The crowds continued to build but I still couldn’t see the line.  I spotted David and Mel cheering me on but I still couldn’t see it….  Finally I rounded a bend and there it was!  I had to avoid a collapsed runner as I finished (there did seem to be an unusually high number of people collapsed on the side of the road having medical treatment during this race) and we were done.  There were huge queues to collect t-shirts and goodie bags but they moved quite quickly.  There wasn’t actually anything other than leaflets in the bags but you did get water, cakes, chocolate, chewy bars etc. while queuing which was nice.  The next queue involved local produce (cheese, pâté, biscuits, cakes, cider etc.) but unfortunately you didn’t get a plate so it was a case of how much you could carry in your hands or stuff in your mouth while you were walking down the table.  Unfortunately Mel and David couldn’t gain access to this area so we didn’t hang around too long out of guilt…. The only thing we didn’t get was a medal.

The only thing then left to do was to head into town and grab a few beers to celebrate followed by a day of sightseeing (and a few more beers).  All in all it was a top weekend with a top group of lovely people. 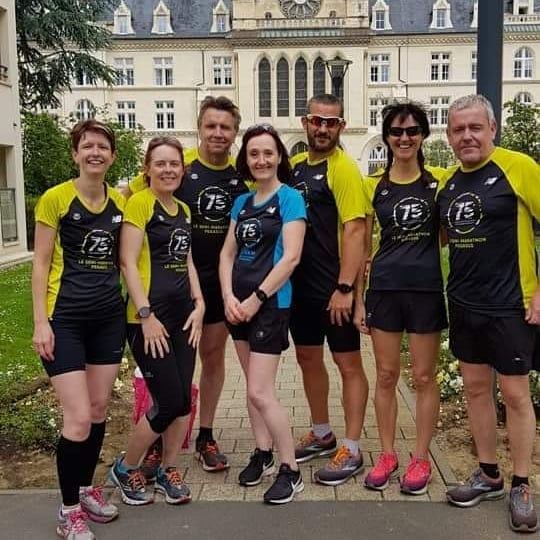 Mentioning no names, let’s just say that the long car journey home was easier for some than others! ;-)