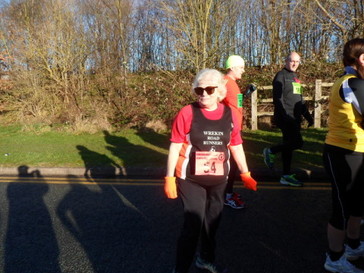 When did you first Join Wrekin Road Runners?
I joined this brilliant club in August 2000.
When did you start running and why?
I started running in May 2000, the reason was to do the London marathon but never got a place
for a few years until 2006 and that was through the club's ballet. Meanwhile I entered the Wolverhampton marathon, this was my first marathon. Its was a very hot day and yes I got lost, the marshals had gone, I ended up doing 29miles and no medals were given out to any one so I spat out my dummy..

Just a quick reflection on my younger days: I suffered from Tuberculosis, mastoids,palsy, I spent most of first five years in and out of hospital, leaving me with severe balance problems for a long time and was
not allowed to move about, after a while I got fed up and gradually became more mobile and did my own thing. Because I was late starting school this caused me great problems with my English and maths, but found cooking and sport were my escape.
When I married John he was already practising judo he persuaded me to have a go and this started of my judo life. After losing our first child we decided to go back to judo and from then on a whole new ball game.
I gradually got up the grades and gained a black belt (1st dan), I was the first one in Shropshire I eventually ended up with three black belts (3 dan) which was a rare thing in the Midlands.
There was already a British mens team. So when it was suggested a women's team and the trials were being held at Crystal Place I was down like a shot to have a go, I managed to get a place in the GB women's squad, this was very exciting for me and it meant I would put Shropshire on the map.
The first time I knew I had place in the GB team for Munich in Germany was up the high street of Broseley, (its said Broseley housewife picked for Germany) owing to the fact that the letter to me got delayed in the post.
When I told my boss he was very reluctant to allow me the time of so I gave my notice in because to me this was a chance in a life time. I was in the squad for 4 years and represented GB in Holland,Spain Italy,Switzerland. After teaching judo for ten years I decided to retire. It was a wonderful experience with plenty of medal. Then in year 2000 I thought I would give running a go and the rest is history.
What's it like being Famous?
About being famous don't know, I hope I am a good ambassador for the club.
What is your favourite pre and post race food?
My favourite food before a race is porridge and honey, after anything I can get my hands on..
What is your favourite races home and abroad and why?
My favourite race at home, Race the Train 10k its got everything, the nick beer 10k with the Great Orm and its by the seaside & Mad Jack its got a lovely pool to run through.
Abroad Berlin marathon they catered for fast and slow runners and after 6h 15m still thousands waiting making me feel very special well it was on my 61st birthday.
Midnight half in Tromso in Norway I came in at 1am in the morning and the sun was still shining with blue sky's sheer magic..
What tips would you pass on to any new or experienced runners?
New or experienced runners Just do you own thing and don't waste time cheating.
What keeps you motivated to keep running?
I am very lucky to be able to get up early in the morning and jog down Ironbridge road its like wining the lottery.
If you could run with anybody past or present who would it be and why?
I have four Heroes Chris Brasher, his idea for the London marathon was for people to achieve a marathon.
Mo Farrah well he is just magic
my local heroes are Claire Martin who I think is a fantastic person who always find time to speak to me  and not forgetting Paul Ward,who at my first race I got lost came and found me he has always found time for me and given me 100% support to which I appreciated. the only problem with these runners
could they SLOW DOWN ENOUGH???
Have you got anything special planned for 2013?
2013 looking for some unusual races and do 70 races starting from September..
What does it mean to you being part of Wrekin Road Runners?
Being part of the Wrekin R R Club is "simply the best" and great friendship and always lots of encouragement for an old gale like me.
What do you do to relax in between all those races?
I relax with Zumba, crosswords,embroidery,and checking the pink champagne.

How often do you run each week?
I run 3/4 times a week depending how my body feels although I am upping the miles because of the Shrewsbury 1/2.

What does your family and friends think of all you running?
My husband said he is very proud of me, our daughter Heather thinks I am a first class nuttier, and my family have just come to terms with me doing all this running and take an interest in what I am doing, and what am I up to next. But none of this could take part if I did not have the backing from John who gives me 100% backing i thank him very much.