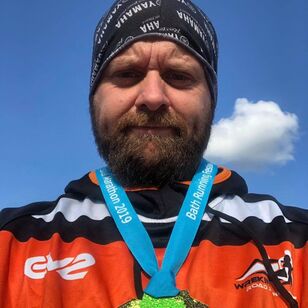 The latest member to be featured in the Members Profile Section John Smart.

What do you do for a living? Data Centre Engineer.

What is the best advice you have ever been given about running? You can’t build speed and distance at the same time.

​When did you join Wrekin Road Runners and what does belonging to the club mean to you?
I believe I’ve been a member since Aug 2015, My friend Robin invited me along for a few try runs up the Wrekin, Even though Mick Fereday was leading the groups, I came back for more.
Belonging to the club means a lot, I try to give back where I can, I run lead & help in managing parts of the website, and also I love that when we are not running we enjoy a good beer/gin with large portions of cake/pork pies after.

​You always seem to be training, what is your favourite training session and where is your favourite place to run? I’m not really fussed where I run, I do a lot of my non club training by myself as I have the habit of getting up really early and throwing in 10 miles before my wife gets up. Newport Track I like, nice and flat & very little obstacles to slow you down.

What brand of trainers do you wear?
Asics Nimbus I have worn mainly for road events, but I have been giving the budget Kalengi brand a try from Decathlon.

What is your favourite piece of running kit? I Love my new Kalengi running shorts they have loads of storage space along the belt, I don’t have to carry extra things like running arm band for my phone.

Who or what inspires you and why? I’m inspired by trying to do something out of the ordinary and the prospect of a good party at the end of it. (Normally several ales)

What is your favourite (go to) food or drink after you have finished a long run? Got to be the pub for a swift ale & a pork pie if we are in Wellington on a Thursday, I do though if I attend on a Tuesday love the big plate specials at the Wrekin Giant, with an ale of course!

What has been your favourite race to date and why? Equinox, it’s the week before my birthday, it brings out what’s best about our club, a weekend of running, entertainment, eating, sharing in each other achievements & encouraging everyone to just push for 1 more lap!

What event / race that you haven't done yet are on your bucket list?
I’d like to do one of the big 5 marathons, tempted to push for a charity place at London next year.

Do you ever listen to music when you run? If so what do you like to listen to keep you going? Yes I do, most of my music taste scares people, 200bpm+ Google Hardstyle, Dutch Hardcore, Jumpstyle, Evil Activities, and Brennan Heart to give you an idea of some of the noise I listen too!

​What is the funniest thing you have ever seen whilst out for a run? I’ve seen some utter madness while out running. A sheep chasing a club member during Shifnal Half Marathon is definitely up there, Guys dressed as the Jamaican Bobsled team, a 6ft guy dressed as a squirrel, a man running with tumble dryer during Birmingham Half, 2019’s Equinox had a guy running in a 7/8ft gorilla suit. Where his face was in a cage, a lady with a Flamingo called Nigel; this made my Deadpool morph suit look insignificant in comparison.