Report by Paul Spriggs
​As Lee wanted breakfast it was an early start for a race that started at 2 o'clock in the afternoon, as we headed out of Telford at 8:30 in the morning the weather was not looking good. As we got closer to Llanberis Darren let us know he had never been to this lovely area of Wales! It was a shame as we got closer to Snowdon the clouds were very low so you could hardly see any of what was to be the race route.

Numbers collected, breakfast eaten and we still had a couple of hours before the race start, it was still raining so there was a lot of debate around footwear and jackets.

​2 o'clock soon came around and it we were off, the first 3 quarters of a mile were on road,this is no ordinary road most people were walking it as its very very steep. You then hit the mountain only 4 miles of climbing to the top at 3,500 feet, the track is rough in places and very uneven there were lots of marshals along the course all cheering you on.

As I hit the 3.5 mile point the front runners were already at the top, at this stage you start to climb the rock steps as I reached the top the front guys were on their way down, watching them fly down the hill is impressive they seem to have no regard for there own safety. Once you finish the steps and pass under the bridge the hard climbing really starts hands on knees and keep going. Before I got to the top Lee was already on his way down. When you get to the top its very busy with runners coming down and lots of walkers wondering what the hell's going on with all theses nutters in vest and shorts in the rain running to the top.
As I started to run down I saw Darren he said Lee is about 10 mins in front, I thought here we go I might catch him, how wrong could I be as I started to push faster down hill past the steps down past the Cafe, then bang smashed my foot straight into a rock. The last two miles were a painful shuffle, as I got to the road my legs were gone but still managed a bit of a sprint finish at the end.

Then straight in to the medical tent to have my foot looked at, after some time being tended to by the doctor and strapping my toes together and Lee have a good laugh at me expense it was time to cheer Darren in.

This race is the highlight of my running calendar its tough but great fun and a real challenge I am sure we will all be back next year.

Report by Kathy Ling
​It was Friday night and we travelled up to Elvaston Castle in Derbyshire. It was a 3 lap 10k, and the weather was very hot and humid. About 500 took part and as I approached the end of the 1st lap the winners were passing me, giving me great encouragement. Then, on lap 2 I felt I was going down as it was so hot and humid. I thought "come on old girl get your little legs going" so I downed the water and seemed to pick up. The marshals were brilliant on the last lap, Cynthia & Al came to meet me which was great. When I got over the finishing line the marshal asked me how old I was and then took me over to the goodie stall and gave me 3 small bottles of wine and a bottle of beer for John!

My time was 1h.37m, I know this is slow but at least I finish it where a lot of people drop out on the second lap. And I was not last which makes a change. We also had a good T Shirt. Because I am a lot slower now I was thinking of not doing any more races but then I do love my running so you will have to put up with me a little bit longer and in two weeks time I would have been a member of this fantastic club for 16 years so a big thank you every one for all the support you have shown me. 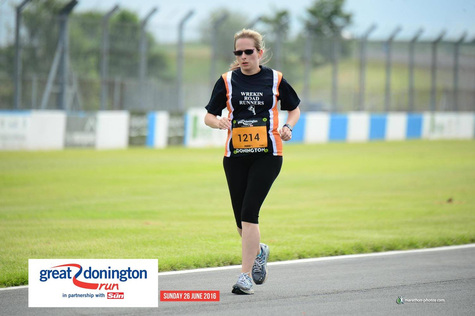 ​Having run my first 10k at Market Drayton this year I wanted to build up my distance running with the intention of doing my first half marathon. I thought a 10 mile race would be a good intermediate step. There aren't many of those around but I am a bit of a girl racer so a motor racing themed run at Donington Park was an immediate attraction. Sure, I'd have preferred to zip around in my masterpiece of German engineering, but if that wasn't possible then why not run?
Part of the Great Run series, I expected this to be a well run event and it was, apart from the fact that my race number didn't arrive (and still hasn't...). I was able to get a replacement easily enough on the day, and I signed up to receive my race photos posted automatically to Facebook, which was a good feature of the event.

​The weather was overcast with rain prior to the start. It did remain dry for the actual race and thankfully the sun only poked its rays through the clouds very briefly. So, pretty good for running.

The 10 mile course involved two "short laps" of the race track itself, followed by two "long laps". The long laps involved a detour down what seemed to be an access road near the main grandstand.

VIP for the event was Sonia Samuels who was the second woman in this year's London Marathon and is training for the Rio Olympics. Her husband is her pacer and runs just ahead of her then lets her overtake at the end, which seems like a bit of a raw deal for him!

There were 500 or so participants in the 10 mile race and we set off to the sound of revving engines and the Top Gear theme tune. On the first lap I focused on not running too quickly. I intended to stick to 6.30 to 7.00 minutes per kilometre. The race track itself was, as you would expect, super smooth. No need to watch for kerbs, pot holes or tree roots. Soon enough, I could see that the track was not as flat as it looks when cars or bikes are zooming round at high speed. There's a fairly gentle but relatively long incline followed a little way afterwards by a shorter one. I kept my head up, slowed down but did not stop to walk, unlike many of those around me. And then thought, "I've got to do this hill another 3 times...." which was a definite downside to this race.

Coming under the start gantry after 1 lap and approx 3k, I was lapped by Sonia Samuels. She was running approx twice my pace and seemed to just float on air as she came past. Soon afterwards the other elite runners were lapping me as well. I kept my eye on certain people ahead of me, eavesdropped on a few conversations, and concentrated on my breathing and maintaining a steady pace.

Lucozade Sport was also available in addition to water at the drink station. Not being able to eat within four hours of starting a run, I took advantage of the offer of Lucozade and sipped on a bottle from lap 2 to lap 3.

In stark contrast to the Market Drayton 10k, there were very few spectators as most of the racetrack is not accessible to spectators. The few that there were were clustered near the grandstand and start/finish area. Great Run marshals were very enthusiastic but few and far between as the only real place they were needed was when you left the main racetrack to do the extra bit on the long laps. This meant that for most of the course, there was not much distraction. I  focused on staying with or catching up certain other runners and just kept on going. There was music playing in the area of the extra loop on laps 3 & 4 which all seemed to be 80's tracks so clearly aimed at my demographic.

As I neared the end I increased my pace a little, which was as much as I could manage, and ran past the chequered flag in 1:52:17. 10 mile finishers were offered a free 10 minute massage which was very welcome, but extremely painful!

Upsides of this race - novelty of running on a racetrack, wheel shaped medal, and the massage afterwards. Downsides - having to do 4 laps of the same track, and relatively boring landscape.