After the race was cancelled in early December last year due to the snow they rescheduled the race for Sunday 25th March the same day as the Ironbridge Half Marathon, which i think reduced the numbers, still 8 hardy Wrekin Road Runners stood on the start line in glorious sunshine.
​
We were off and cheered on by the WRR supporters Julie & Sue. The race is a mixture of woods, forest trails and hills and then a few more hills and then some more hills. The first big climb is Poison Bank that everyone was walking up but once you got to the top there were some fantastic views. There were more ups and downs as you headed towards the big dippers, these are 3 down hill and up hills that are very steep but great fun to fly down. Just to add to the fun you finish the dippers then  hit another climb for about a mile.

As you start to get near to the finish there is a steep up hill and then a fast down hill to the finish. Its a great race with all the Marshalls being very supportive around the course.

Its a great race that I will definitely be doing again this year in December all runners also recieved a nice Buff.

After a few years of marathons, half marathons, injury and loss of mojo, I decided that 2018 was going to be the year to work on my 5k and 10k speeds. After enlisting on Phil’s improver programme, the only thing left to do was pick a 10k to race. After scouring RunABC for suitable contenders, I narrowed it down to two –Shrewsbury 10k (hilly!), Fradley 10k (flat!). After my initial thoughts of “where on earth is Fradley?!” I quickly located it just outside Lichfield. After recruiting Rob and Elaine to join me, we were good to go.

The race is basically 2 laps of Fradley village, along quiet country lanes – I’m not a big fan of laps so I wasn’t entirely convinced I would enjoy this one, but the lure of a fast flat course swayed me. We followed the advice to get there early which proved sensible as parking was on one big field as you entered the village and queues were already starting to form. Race numbers had already been posted out so there was no need to do anything other than queue for a pre-race pee (or in my case go back to the car to get my race top and number as I’d somehow managed to forget to put it on…). Rob and Elaine tried to sneak past the marshal who was insisting we walk all the way to the far end of the field to access the car park that was right in front of us while I quietly mumbled “I’m with them!” as I scuttled past looking guilty!

Race HQ was in the Village Hall and a few minutes before the start of the race, we all followed the signs for the starting line. It was only at this point that I realised how many runners there were, as the queue stretched a long way back. Thankfully the race was chip timed so it didn’t really matter, but it was difficult to judge where to position ourselves. I didn’t hear any signal to start the race (I was too busy admiring the rather nice large house next to where we were all lined up!) but we all started to drift forward and then we were off.

I really enjoyed the route, which took us back along the front of the Village Hall and Church, through a housing area and then along country lanes. The start was quite congested with lots of weaving around runners required, but the roads were wide enough to allow for passing. As promised, the route proved to be pretty flat with no Dave Isaac hills anywhere in sight! I didn’t even mind running through the village for the second time as the finish line, although it could be seen from the road, was set back quite a distance so you didn’t actually have to run past it as you started the second lap. The second lap didn’t prove to be as awful as I was expecting as at least I knew there weren’t any hidden hills anywhere on the route.

After completing the second lap, we were directed off the road and onto the field, where the welcome sight of the finish line prompted a bit of a sprint in a bid to get a reasonable time. The finish area was really well organised to cater for the large number of runners in a relatively small space. We all followed the switchback queuing system to collect a bottle of water, a medal, a banana, a Twix and a T-shirt (I was obviously too slow finishing as they had already run out of small ones…). Craig was waiting patiently for us at the side of the queuing area, having finished the race somewhat earlier than the rest of us. I was relieved to see them handing out medals, as the pre-race information had indicated that all runners would receive a “memento” and Elaine had convinced me it was going to be a plant! With a successful run completed, we had a choice of bacon or sausage butties or homemade cakes from the catering vans outside the Village Hall. Rob decided his body was a temple, while Elaine and I opted for well-deserved cake.

So, would I do it again? Most definitely. It is a well organised event (but get there early and don’t be in a rush to get off the car park afterwards) and the route is scenic and fast. I didn’t achieve a PB but it was my fastest 10k in a good few years so I’m happy with that. 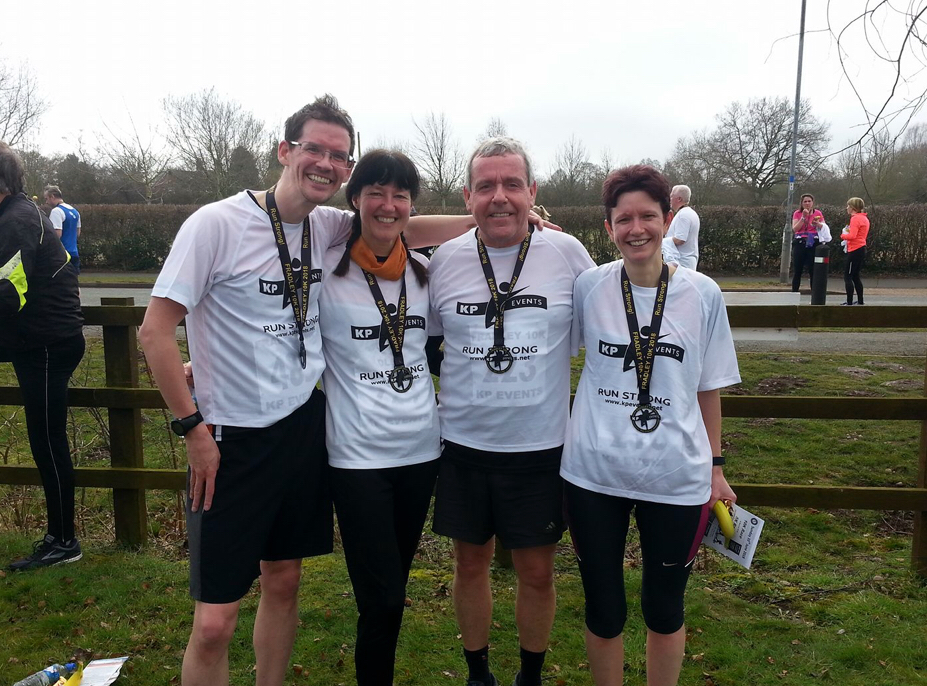 By Kathy. Ling
On March 17th John and were on the runway at Manchester airport waiting for 4 hours while the ground staff de iced our wings and as we were 12th in queue and when they reached us they ran out of de icer. Eventually we were given the all clear and off to Malta.

On the Sunday it was a lovely day, we popped over to the place where the race started at night, the fireworks were in full swing until 12.30am and 6 am soon comes round. I had to be at the start for 7.15 am to meet Saviour to pick my number up well he didn't come till 7.45am!

Everybody was laid back, taking their time to set up. The mobile toilets were another story! So at 8 30am we were all asked to go down the main street while the traffic was in full swing . We had a minute silence for this young girl Lisa Maria. He then said are you all ready GO! Off we went! We had to run a large loop round the town with the traffic no marshals. When I finished the first circle my John shouted to tell me which road to take. Then the heavens open and a full storm came. Got to mile 3, the water was running down the road up to my calves with all sorts of thing coming up out of the drains!!! My biggest worry was the pot holes under the water I was all over the roads watching where I was running. I got to mile 5 and still fighting the traffic as they don't like runners! Plenty of hills, we were told once you get to the top of Dingli Cliff the view was fantastic [what view!] thick mist still fighting the uneven roads the ambulance was following me but then he would take off. I went wrong a couple of times so had to stop and wave and shouted to put me on the right road at mile 7. He ask me if I would to drop out I gave him a dirty look and not on your nelly I know I only had 3 miles to go. By this time the rain had stopped but still plenty of water about. At the last mile conditions were better but people won’t move for you so it was off and on the pavement. Just one more hill to attack by now the ambulance had passed me and carried on to the end. When John saw the ambulance he wondered where I was. How ever I turned up dry as a bone owing to the sun coming out. I thought it was great it keep me alert and would love to have another go but not to sure if John could stand the stress. Made our way back to hotel I had some special liquid my time was 2h.55m
love the Bling!

by Warren Smith
Once they annouced the first Chester 10k, which fell on my Birthday I thought it would be a good one to go for a PB, with the course described as a fast course. With the weather not being great the week up to it, the " Beast from he East" got the better of the " Wimp from the West" and little training happened in the week before. However after the Telford 10k being my second fastest 10k ever and a few speed sessions I thought it could be possible. Arrived nice and early to zero frost or snow, in fact Chester seemed to have missed all the bad weather. Race started and first mile was mostly down, and I got a 8 min mile and felt good. Then as we started going on the same route as the Chester half my legs and head really didn't want to move..
I was looking for the KM markers for it to be over, or a freak gust of wind to take me off course. It got tougher for me yet didn't quite, and knuckled down, but nothing was working not even the task of breathing. It's run on fullly closed main roads, yet a sense you are in the middle of nowhere at times. Last mile of the 10K was all up. The silver lining though is a fast course ( it was won in 29 mins by the guy who won Telford 10k) great organisation, goody bag and medal. Great to see so many WRR there.