By Steve Gill
I didn’t originally enter this race (sells out quickly) but having reviewed the entry requirements for an event I hope to do in 2018 decided to try and get a place. Lucky for me I got one through a withdrawal of an injured runner.
Having moved the start time from a normal 14.00hrs to 12.00hrs it was an early start from Paul, Darren, myself and our support crew of wives.
Registration done, a trip to local café for substance and then race prep left us with 15 mins to the start for a gentle warm up.
700 runners take to the start with as indicated a number ofinternational runners from Europe. They did ask for my autograph but I was far too busy preparing for the race.
Starting in llanberis it’s a simple route of out and back, or should I say up and down!
Within a ¼ of a mile its steep as the road leading to the mountain is at 20%. People start walking from this point. My aim was to try as hard as possible to run as much as possible.
The weather could have been better as low cloud meant you could see not a lot of the mountain but at least it wasn’t too hot.
There are a number of runnable sections and you really need to adjust your plan to make the most of them as there are plenty of blooming steep bits to walk on.
At about ¾ the way up the first runners were coming down. You have to see them to believe the speed they run down hill. Its amazing.
The worst bit was the top where there were so many walkers, runners on narrower paths it made it dam right dangerous.
I made it approx. to the top in 1.10hrs
Now the hard bit – down.
You could fly down it with a lot of confidence but having slipped going up was conscious of slipping and falling on the way down (and I did). This did leave me gingerly picking my way through the stones and been overtaken by a number ofpeople.
The hardest bit but was going down the 20% tarmac hill were my toes were totally in the front of my shoes saying stop stop. Once on the flat bit a sprinted past 5 people on the way to the finish in 1.45.41 so approx. 35 mins descent.
No medal folks, just a coaster and the knowledge of completing an incredible race.
Great runs from Darren and Paul with all of us falling at some point but Paul having the best war wound.
1.45.41 Stephen Gill, 1.56.21 Paul Spriggs, 1.59.44 Darren Owen-Jones.
Would I do it again? You bet I would 😊. 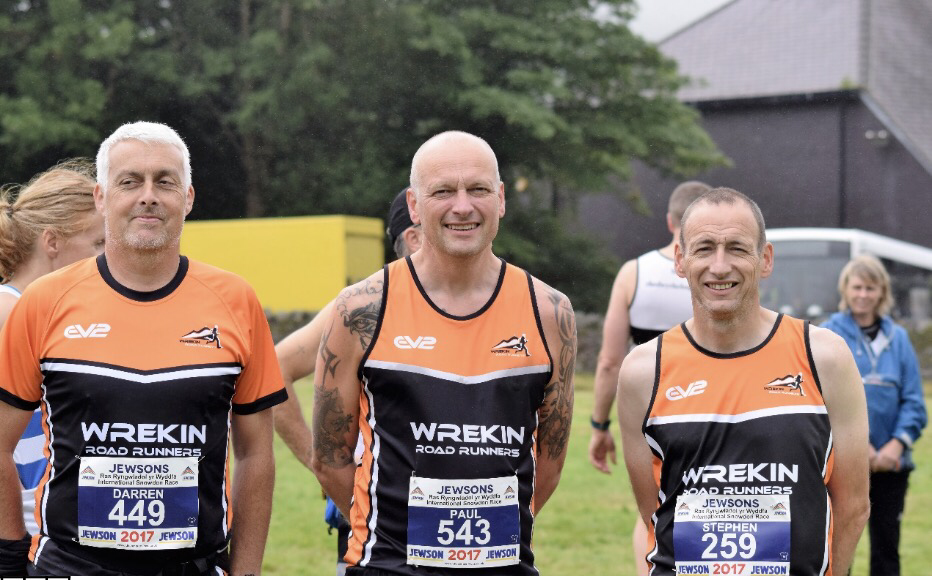