by Steve Gill
This race is as traditional as Brussels sprouts at Christmas, its always there but you never sure if you want it/them or not.
A sell out race to which there are many these days.

A great race to run off the excess calories you have consumed over Christmas though. Also for me a good chance to catch up with friends from other clubs (as my wife pointed out you do chat to a lot of people at races).

I haven’t done this for a few years but fancied giving it a blast but weather can play a critical part as last time I ran it there was water covering the whole of the road at one point. Also not forgetting the year Ice covered a lot of the road but it still went ahead – not sure it would these days.

The start was a bit of a melee with a lot of people out of position due to the tightness of the start area. We were like cattle in a lorry, snuggly fitted but it did keep you warm from the blowing wind on a chilly day.

Off we went through the village, twisting and turning down the roads before out into the Countryside roads. A lot of people seem to have thought it was only a two mile race? Either that or they were peaking too early? You know what I am saying 😉

Its quite a flat course with only a couple of inclines so a good time could be got – unless you were weighted down by Christmas pudding and mince pies that is. As you see the finishing line at the School you know all will be over as the crowds cheer you on. These were much appreciated as the energy started to ebb away.

Lovely T-Shirt for all although next year may go for small rather than medium or will need double helpings of Christmas dinner instead for a better fit.

For me a great race with a good time of 42.45 and finishing just outside the top 50.
​
Also some cracking runs from the many Wrekin Road Runners that entered.
Oh and finished off at the local pub with a pint and a bowl of Chips. 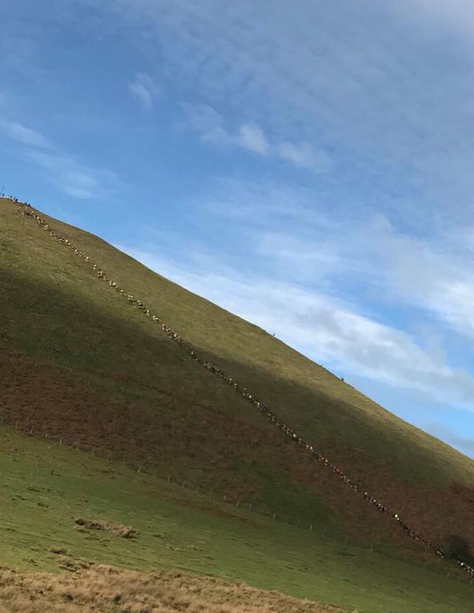 by Steve Gill
​9.1 Miles
Fell races are for nutters they say, looks like I know a few nutters for friends then. They call it fell running but in truth its more of a run/walk thing. This actually mean’s the races might now appeal to you until I say the only reason you walk is its just too steep to the run the terrain or your just completely knackered to do anything else. The good thing is your not alone as everybody else around you is doing the same.
This was another race I had never done and neither had my fellow WRR members. So with no experience to gain from them we each set off at our own paces. The start was like a stampede as we raced across a field to only all come to a halt as we went through a gap big enough only for two at a time. Muttering of that’s my pacing ruined, I am knackered and need a rest anyway from the sheep like field of people cramming themselves through the gate (all in great jest I might add).
Up and across fields and down lanes until you reach the bottom of the Lawley. A line of people strung out up the side of the hill. Now walking I was thinking about something (a great way of promoting your club of merchandise). You see when going up hill all you see in front of you are people backsides, some are so close (well you know). Why not have the clubs name on the shorts as that’s where I spent the next 10 minutes looking at as we all dragged ourselves to the top. Good idea? Probably not but that’s where my mind was.
Up the top the views are superb so if you get the chance to walk up there one day do it. Down to the bottom and then out along fields to the bottom of the Caradoc. Yep another line of people, more bottom thoughts, more heavy breathing and eventually your there. Cracking views again and down you go to the bottom. It was then up through a forest alongside Helmeth Hill bringing you to run along a ridge. This was Hope Bowdler hill followed by the Battle stones (ups and downs).
Once over this it was like a Cross Country/Trail race over fields and tracks. Having not done this race I hadn’t got the nerve to look at my garmin to see what distance to go and just kept a comfortable pace. In hindsight now knowing the course I probably could of pushed it a little more as had a good sprint over the last field to overtake a couple of other runners. Next time eh?
Finished thinking blooming hell that was hard (Saves Phil Goodwin editing the swear words out at this point). Great race and thankfully dry. Only knows hard much harder it would be in rubbish conditions. Again a great effort from all WRR’s.
Back next year- yeah probably and all for £6.
Sorry folks but no T-Shirt or medal, I brought home nothing but mud and memories from the race. Just how I like it.

It started off with the Morris minors doing a trip up to Aberystwyth,  so I said "If there is a race on I'll come!"  But as time got near what with the salt being thrown on the road,  the interest was soon gone.  So I thought I am going. We were lucky with the weather and about 800 took part. It started on time and off we went and you can guess who was last starting.  As I passed the young man on the mike he shouted to me "Kathy you have 33 minute to get back in before the winner comes." What a laugh?  Very enjoyable run along the sea front before turning off in land. A few hills to keep you going, very well supported and good marshals.  Great support when I came in.  Pleased with my time 1h.36m. Nice mince pies, and medal, looking forward to next year!